Today I want to give you a peek at

The Romance of Dracula is Charles' first book and the sequels, Vampires Everywhere, The Rise of the Movie UnDead are in preparation.

And Introduce you to Charles

Charles E Butler was born and raised in the Yorkshire town of Leeds in the UK. He is a writer, actor and artist of independent comic books. He quickly developed a taste for the fantastic through comic books and the movies. His own short films under his Su asti banner are submitted to festivals and have been viewed as far afield as New Orleans. He has written vampire essays for various sites on the Internet and his special tribute Dracula and Werewolf pages can be found on Facebook. 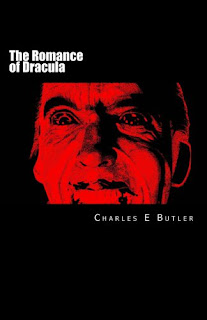 "The Romance of Dracula" is a review of the fourteen Major film adaptations of Bram Stoker's novel Dracula. Complete with illustrations of the fourteen major Counts. From Max Schreck to Marc Warren, The Romance of Dracula is the most concise account of the Count on screen. The Epilogue concentrates on the Count's further/major appearances in fantasy horror films and the book takes interesting side-roads into the exploration of the myth through The Fearless Vampire Killers (1967), the original Fright Night (1985) and The Shadow of the Vampire (2000). An engrossing must-have read for the casual onlooker and the ardent aficionado.


The Romance of Dracula on createspace
https://www.createspace.com/3573229