I originally wrote this in my English Composition Class in college in 2001 three weeks after my brother had passed away. January 31, 2012 marks the 11th anniversary of his death.

Do you believe in Ghosts? How about the supernatural? I've always felt that just because you can't see them doesn't neccessarily mean they don't exist. I have always believed that the spirit stays with the body for three days after a person dies. Where it goes after that I'm not sure. I do know I have mixed feelings about it.
My brother Bruce passed away three weeks ago. Since that time I have had this picture in my head that as they were taking the gurney through my front hallway, his spirit left his body. I can picture it so clearly. I see his spirit standing there, watching the paramedics push the gurney out the front door. Maybe it's my imagination or just wishful thinking on my part, I don't know. What I do know is that strange things have been happening ever since.
The morning after Bruce died, as I was lying in bed, I heard someone (or something) walk through the kitchen into the front bathroom and yet everyone was still in bed. A few days later, my sixteen year old son swears he heard the same footsteps and heard Bruce's door close, but once again, everyone was in bed.
Then there was the chimes of the clock.  I was sleeping so good and the clock started chiming. It was midnight, but the chimes aren't supposed to ring after 10 p.m. It scared me like it does when the phone rings in the middle of the night. I jumped out of bed, because in my mind I believed Bruce was telling me to check and make sure everyone was alright. I've heard it said that every time a bell rings another angel gets its wings. Maybe that was the message I was to receive. Three mornings in a row we have found the freezer door open. Bruce kept his water jug in there and every morning he would get up, add more water to it and get a drink. Then there's the smell of someone smoking a cigarette when I'm home by myself. Bruce used to sit in his room, watching TV, his window would be open and the smoke would go out his window and drift in through the kitchen window.
But I think the real clincher came tonight. I was sitting at the computer, my oldest son was standing by the refrigerator  and my youngest son was standing in the dining room, when all of a sudden the kitchen light came on. No one had touched the switch. None of us were even near it and yet the light had come on. Strange? Weird? 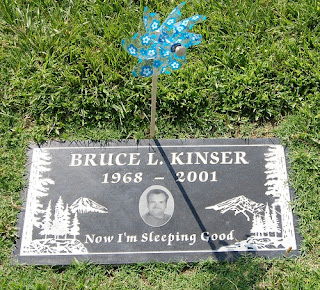 And once again I cannot give you an ending :-( I was scanning this story into my printer which is set up in what used to be my brother's bedroom and can not find the other page with the ending that I had written. I have looked high and low and yet there is no sign of it.

I finally found the last page the other day and For the most part, I had all the story here except for the final summing up paragraph. Here it is...

These are just a few of the things we have experienced over the last few weeks.
Do we believe in ghosts? Maybe. We can never explain the things that have happened.
I don't even know if I really want to. I do know that if my brother's spirit wants to be here,
it will always be welcomed with open arms.
Posted by k at 4:04 PM