A Peek at "Immortal Relations" by G.D. Ogan

I love promoting other authors and wanted to share with you a novel written by one of my car club buddies!
His name is Guy Ogan and he writes as G.D. Ogan and "Immortal Relations" is his first published novel. Now I haven't read it yet, but I do have it in my kindle and once I read it I will share a review, but for now, check it out and if you've read it, please leave G.D. a review on Amazon. 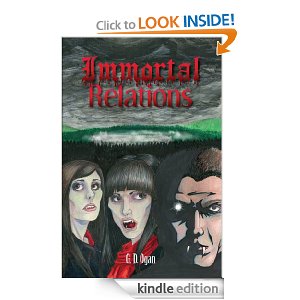 
"Immortal Relations" is my first foray into the field of fiction and I'm working on the second in the series now. Since I'm a "new author" and my book has many new concepts about vampires (for example, my good vampires don't get their blood from the living, human or other animals, they own funeral homes and the law requires that blood be replace with preservative in the body of the deceased before burial. The funeral homes follow funerary procedures in removal of the blood, but rather than dump it down the drain, it is mixed with an anti-coagulant and then delivered to "the Residency" for the good vampires to sustain themselves). The good vampires are guardians of humans from criminals and the vampires who they call "out-of-control"). There is a bit of erotica in this book as vampires don't have the hang-ups humans have and four combat situations. The first is a direct attack from the out-of-control vampires against the good vampires, but the military knowledge of Gary (which is basically my own character) thwarts their attack. The second is where the bad vampires, under a new leader, plan to attack Czech Military Units, change them and then use them and their heavy tanks and aircraft to attach the Residency, where the good vampires are. Again, military technology and tactical planning thwart their plans. Next, the bad vampire gang plan to attack and steal nuclear weapons to use against the good vampires and to blackmail human governments, but the gang runs up against a prepared group from the British Army and Royal Marines, who were warned by the good vampires. Finally, the leader of the gang, travels with the remainder of his gang to try and steal chemical and biological weapons from a poorly guarded old Soviet facility, but warned by the good vampires with the help of the British, Troops of the Russian Federation wipe the gang out.
Posted by k at 7:17 PM