Sneak Peek of "Awake In The Mad World"


"Awake In The Mad World" by Damon Ferrell Marbut 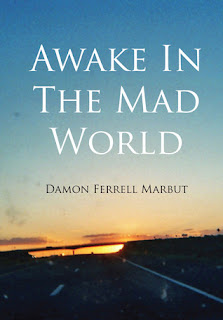 Damon's novel, "Awake in the Mad World", is his debut novel and is tentatively set for a late June, early July release in print.
But you can get your copy right now at Kobo.
http://www.kobobooks.com/search/search.html?q=%22Awake+in+the+Mad+World%22

Find it for your Nook here
http://www.barnesandnoble.com/s/awake-in-a-mad-world?keyword=awake+in+a+mad+world&store=nookstore
And the Kindle version will be out a couple weeks after the print, which is also exclusive through Amazon and Createspace.

A Pre-Release Book Discussion in Damon's own words.


Elements of my novel "Awake in the Mad World" are, inarguably, “coming of age, identity and self-discovery”. But also, it’s about place, and asks, Where do the dreamers fit in? Where, in the modern American conversation that’s been changed by technology and is continuing to be changed by the political landscape? How we communicate and what we’re communicating about is managing some sort of odd relevance and mindlessness simultaneously. That said, is the importance, then, of one’s search for Self in this country being put on the backburner as greed and distraction take precedent by governing how we define our survival as artistic, creative thinkers? This is not an often nor heavily vocalized concern among those of my novel, not this particular topic, but they are on the edge of its weight and worry, and are therefore living in the early part of the new millennium where this conversation is developing as an imperative. And though the novel’s characters representing this search are post-graduates in their mid-twenties, the disillusioned and disenfranchised in our culture are of all demographics, ages, income ranges, genders and ethnicities. My novel is about human relationships, also, and how the growth and purity of our ambitions are shaped and altered by the friends and family we include on our paths to not perfection, but wholeness.

Damon's Blog  has plenty of information about it and readers can connect with him there at http://damonferrellmarbut.com/
Damon has set up his blog to be a forum to discuss anything that pertains to the craft and process of writing and publishing,  He hopes it becomes a location for fans to become friends as well. So make sure you stop by and wish him well with his new book and keep up to date with everything he has going on!
You can also find Damon on Goodreads

Damon lives and works in New Orleans, LA. He self-published his debut novel through Createspace, a novel entitled Awake in the Mad World, which is set for release near July 1. He currently is working on a new novel largely based in the French Quarter of New Orleans, and has a non-fiction book proposal under consideration with a publisher.
Posted by k at 3:33 PM